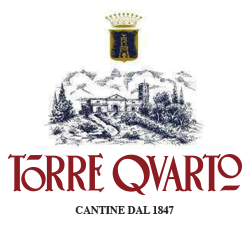 Torre Quarto has a long and important history. It was founded in 1847 by the French Dukes of La Rochefoucauld who controlled between Campania and Puglia about 4,750 hectares, 3,100 of which were vineyards. For this reason, they built the Quarto Ducale winery, now Torre Quarto, in which great red wines were preserved and aged thanks to the immense underground naves in tuff and stone and 150 French oak barrels with a capacity of 70 to 290 hl each, for a total of more than 20,000 hl. From the center of the cellar, a private railway carried the wines to the station of Cerignola, then they were also transported to France, where they were used as blending wines. In the thirties, the name was changed to Torre Quarto because of a beautiful tower adjacent to the cellar, where the grappa was distilled from the marc after fermentation of the grapes. Over the decades the name Torre Quarto has become synonymous with high quality and is recognized as one of the most renowned wines of Puglia, the pride of the city of Cerignola and its history.