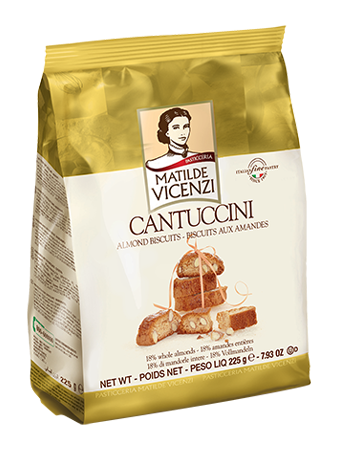 These Italian almond biscuits are one of the most beloved and well-known Italian desserts. They are made with natural ingredients and packed with flavour. Perfect with a glass of raisin wine or a cup of coffee.

The name “cantucci” most likely dates back to the 16th century, and seems to derive from the Latin “cantellus” which means “piece of bread”.

In fact, according to tradition, cantucci were originally off-cuts from the sweet loaves that bakers would sell to their wealthiest customers. The discarded portion would be eaten by peasant families, and was called the “cantuccio” or “canto”, which means “on the corner”.

May contain SOY, OTHER NUTS.

Matilde Vicenzi's story begins in 1905 with a small but precious production of pastries, ladyfingers, amaretti and puff pastries.
Matilde Vicenzi's world is engaging and fascinating, ready to give you moments of sweetness and warmth typical of the people you care about, where even a simple chat acquires an unmistakable flavor.