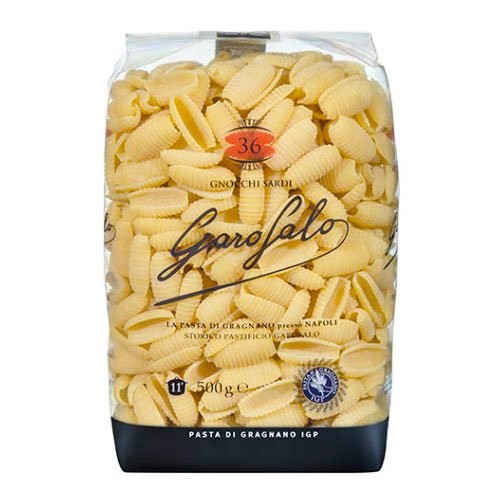 Gnocchi sardi is a regional pasta format inspired by the ribbed shells that make the beaches of Sardinia so beautiful. Garofalo re-interprets the format with the craftmanship of their pasta-makers, and makes it extra rough to better hold the sauce. Gnocchi sardi by Garofalo are certified Pasta di Gragnano PGI.

Gragnano, with its mills and water springs with perfect mineral compositions to make the dough, with its legendary artisan tradition linked to the production of pasta, with its streets where you walked next to the long pasta left to dry, and its sunny roofs where dried short pasta, became the "home of pasta". It was an engineer of King Ferdinand I who invented the "Bronze Man", who took the place of the foot of the people in amalgamating the dough and who laid the foundations for the first pasta factories, which took on an "industrial" dimension for the first time in Gragnano. From the years when the city itself was a factory, pasta production has evolved and Gragnano has seen the birth of modern pasta factories. Garofalo has always been a protagonist of this story. Its name already appears in 1789, when it obtained a licence from the Municipal Council for the production and sale of high quality pasta. It has always been the first pasta factory in Gragnano in terms of size, quality and volume, thanks to its ability to keep tradition alive by putting it at the service of modernity and technology. Knowing Garofalo's roots is a first step to understand where his passion, his craftsmanship and his innovative spirit come from.